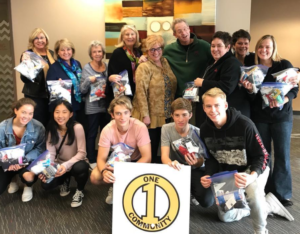 This past October our OneCommunity took on a challenge! We were inspired by a Facebook post that Ann Pryor, Lovitude Artist and Park OffiCenter Member, made about her random act of kindness in giving a homeless person a “Lovitude Kit”. Ann carries these kits in her car and gives them to people she sees who are in need. Her post was read by Lori Spiess, CEO of OffiCenters and she immediately sent out a call to action . Lori posed a challenge: Our OneCommunity will collect donations and create 300 Lovitude Kits. It was a matter of minutes before donations started coming in via Facebook: 50 pairs of wool socks, 300 toothbrushes,  100's of personal toiletries from Westin Hotel (Manager Matt Truskolaski) and phone call from Pastor Michael Pilla from Jesus in the Cities, Dr. Verna Price from Girls in Action and several community members asking how they can help.

Pastor Michael has been distributing our Lovitude Kits to the homeless people living in the Minneapolis tent community. He tells us the kits are an excellent way to open lines of communication and get help to those who are so desperately in need.

OffiCenters is an entity of
U.S. Administrative Services Corp.